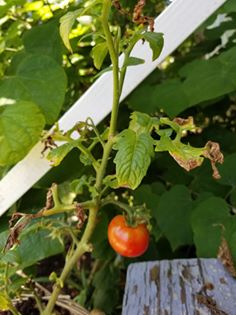 I have about five tomato plants. I bought them as seedlings and they have grown tremendously. One is even up past my knees. I don’t eat tomatoes but I wanted to grow something. I got into a discussion with a friend of mine about tomatoes and made a deal. If I grow them then she will eat them.
Now, I have five healthy tomato plants. They’ve put out a few blooms but when it comes to bearing fruit only one plant out of the five has managed it. The tomatoes are also smaller than what they should be. That week of hot weather we had probably has taken a toll.
I talked to my mom about it and we are going to give them some more plant food to see if that helps, but she also mentioned the lack of bees. I mean I’ve read the articles and everything, I know that bees are endangered and that it is a very bad thing for the entire world. It was even mentioned in a Doctor Who episode once. Its why I have a random pot of wildflowers growing near the back fence that I just leave alone and let do their thing. Yet, I cannot actually recall seeing many bees this year. Maybe a bumble bee or two but none of the honey bees that usually buzz around the clover.
Now, as I look at my tomato plants I am saddened. When I first got them I actually worried that five plants would produce too many tomatoes for me to give to my friend and she would grow tired of them. So far I’ve managed only three and one of those we laughed about because it was so small.
I set out to grow tomatoes but now as I look at the plants on my porch steps I realize I unwittingly grew an environmental science experiment instead. I must say I am unhappy with the findings. 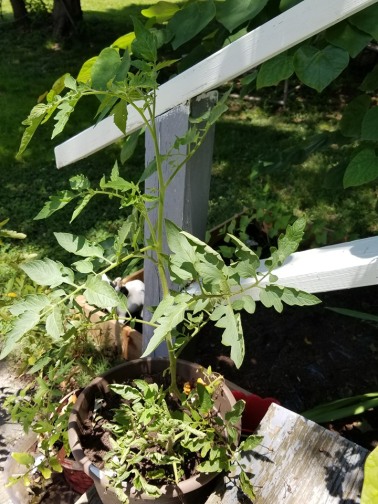