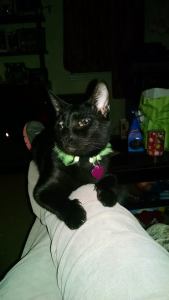 This May I lost my cat Max to cancer. It was sudden and I wasn’t prepared. I took him to the vet because he wouldn’t eat; I thought I was being overprotective and they would tell me he had a cold or something. I thought “better safe than sorry”.  Turns out sorrow can creep up on you even if you are trying to be safe.

The doctor came back after doing some x-rays to let me know Max wasn’t going to get better. She had felt a mass in his abdominal region and wanted to get a better look. The mass showed up as several tumors that were pushing down on his digestive system. He couldn’t eat or drink because he couldn’t go to the bathroom. There was nowhere for the waste to go and it would only get worse until he eventually died in great pain.

During this explanation, Max kept trying to crawl back into his carrier. He wanted to go home. He didn’t feel well and he wanted me to hold him or take him home. I shattered.

I had Max from the time he was a tiny kitten. I probably have other posts about him on this blog. He showed up on my porch three years ago with a bad eye infection. He 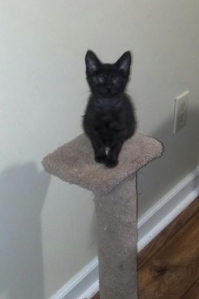 eventually lost both his eyes, yet being blind never slowed him down.

He knew when it was time for me to come home from work and would wait near the door for my arrival. Then he would stand up on his hind paws and reach up, like a toddler, wanting to be picked up for cuddles. He very rarely meowed, we joked that it interfered with his sonar, but his purr was strong and deep.

So there I stood in the vet’s office facing the worst possible scenario. They advised that we put him to sleep. The cancer was too widespread for them to operate. They asked that I stay with him while they got him prepared, in order to keep him calm. I didn’t want my baby to suffer any more than he already was so I agreed. I stroked his soft black fur as the injected him with a tranquilizer. I eased him down to his side as it took effect. 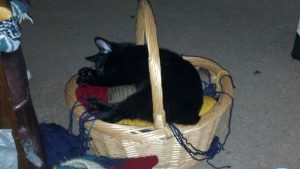 Tears blinded me through the whole processes. Yet when the vet came in with the final shot I couldn’t stay. I couldn’t watch the life leave him, so I gathered my things and fled. I couldn’t tell you what the vet bill was. I just shoved my credit card at them, signed where the told me, and then left.

I could have taken the body home but I wasn’t strong enough at that point to deal with it. So the vet’s office took care of that as well. (They are a very well respected office in my city. A bit more pricey than some others but the way they treat the animal is worth it. They didn’t just dump him in the trash can out back.) 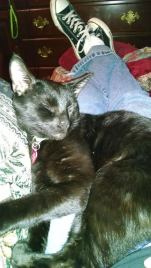 So here I am. It’s two months later and my heart is still broken. I miss my Max terribly. We have two other cats and I love them, but I was Max’s person. The other cats have claimed my kids. Our chihuahua is without a doubt my son’s dog. All the animals have been giving me extra attention since Max passed away but there is still a hole…

This story has been more difficult to write than I thought it would be so I am going to have to cut it in half. This is the sad half. Like most serious events in life, this experience clings to me. However, there is a light of hope and happiness. Her name is Molly. I will tell that story in the next post.