Well it is Monday again.  I am sitting here at my computer typing away and watching snow fall outside my window.  I live in the Southern U.S.  Snow doesn’t happen much around here.  (At least not in the lower elevations.)

According to the local weather man, flurries were supposed to start around noon today.  They were about three hours off.  I am packing a duffel bag to take to work tonight just in case I get stuck there. 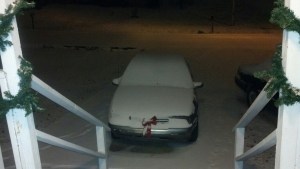 over 29 hours.  She slept on pet beds in the office.  This time she is bringing her sleeping bag and a change of socks.

It’s interesting how uncommon weather can bring things to a stand still.  If we were a bit more north two inches of snow would be nothing, but here no one is prepared.  The roads often aren’t salted, people don’t know the proper way to drive, and snow plows don’t really exist.

Two inches of snow meant children were stranded at schools and on school buses. We had a 27 car pile up on one of local major highways and there were abandoned cars on the sides of the roads everywhere.  My ex-husband took his truck to pick up our kids because we thought he would have an easier time.  In the end all the parents had to walk the last block to the school.  It took him an hour and half to make what was usually a ten minute drive and he slid off the road twice.  They barely missed the pile up.

This time we are supposed get more that two inches but they have been spraying the major roads with brine for the last two days.  Hopefully we will have better luck this go around.